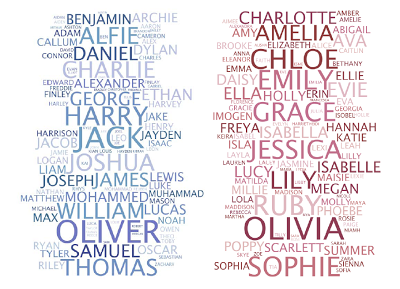 Everybody has their little obsessions, right? Oh, just come on and admit it....I know you do. Well, in addition to stationery and the Jazz, mine is.....NAMES. I really could go on and on about all the random knowledge I've somehow acquired over the years about this fascinating subject. I know some may brush someone's name aside and say, "it's just a name" but I cannot. A name to me is EVERYTHING. In fact, I've found it interesting ever since I was little girl. I can remember going to the bookstore (my Dad used to work at one so this was a frequent hang-out for us), gathering up baby name books, sitting down in a corner and creating lists upon lists of all my favorites. Odd, perhaps but I relate it to storytelling. After all, every story starts with a character, and every character draws upon their name to help define themselves.

I think it's the definition of ones' self by only a few words that excites me.

Growing up, my last name was always slaughtered a conversation starter. It's German, 11 letters long, and has quite a few silent letters in it. My Dad used to say "It's pronounced just like it looks: SMITH." My mother took his last name when they were married and always seemed proud to have it too. I do remember her explaining to me though that one of the reasons why they chose longer first names for my siblings and I (we are Christopher, Katherine, and Jennifer) was to balance out our long last name.

Ahhhhh, here we add a whole new dimension to the picking of the name ~ proper balance with the last name, good flow from the middle name, all a game of sound produced by the coming together of letters and syllables. Some good examples of perfectly balanced names to me are names like Jonathan Taylor Thomas, Neil Patrick Harris, Lisa Marie Presley, Daniel Day Lewis ~ don't you just love how easily they each roll off the tongue?

But then comes nicknames. I have a love/hate relationship with nicknames but they are out there and cannot be ignored. Part of me longs for the traditional, true blue full name when another part of me likes the options and friendliness of their shortened versions. I myself go by a shortened version of my first name: Kate. I was thankful my parents chose a classic, easy to pronounce name for me and really haven't found it too much of a bother to write out Katherine for formal things and Kate for all else. Actually, there are many celebrities who go by completely different names than their birth names (I told you I know a lot about this subject!).

For example did you know....

Those were my favorites, but you can check out more here.

There's also namesakes. My parents selected my middle name after my father's mother, Marie. Did you know that it's considered respectful for Catholics to name their first born daughter after some form of the name Mary after the Virgin Mary? We chose the first name Benjamin for our first born because we liked the traditional but friendly sound of it and the middle name of Leroy (which means King in French) after my husband's grandfather. I never had the opportunity to meet him, but always liked the way everyone always smiled as they spoke so highly of him. Our second son is named Grant, which means great and is exactly what we both thought when we heard our doctor announce "It's a boy!" His middle name of Thomas is one we've both always liked, and thought it complimented Grant well. Thomas is also a saint and an uncle of mine. It seems to be more and more popular now to hear of last names as first names (which I love) and think that incorporating family meaning can really add that timeless, solid touch.

Oh, and don't forget initials! Some people overlook what their child's name could spell out with their initials, or don't know how one's monogram features their last name in the middle, first name first, and middle name last. I really enjoyed reading jcrew's recent article about monograms.....

The monogram is an elegant way to make your mark. It’s your name boiled down to the essence, executed with graphic artistry. It’s as old as the coat of arms and it was used as a hallmark in metalwork, ceramics and graphics, marking the genuine article.

So, how does a name lover such as myself ever decide on what to name her own children? As my mother so simply once advised ~ "One should find a name that will suit them properly as a child as well as an adult." Well, after many, many conversations with my husband (I'm sure if you ask him he'll tell you how I've completely exhausted him on the subject!), research into our genealogy and name meanings, and practice name writing (oh yes, I do this often), you finally decide on a name that just feels right. And in my opinion, no one but the parents themselves can answer that best. What an honor!

If I've intrigued you enough by all of this, here are some links to my FAVORITE name sites....(WARNING: you may spend hours and hours of time...finding the perfect name can be addicting!).